Books of Pramudith D Rupasinghe have been translated into several languages and been launched in more than 60 countries around the world.

Behind the Eclipse – The Unheard from the West African Ebola. 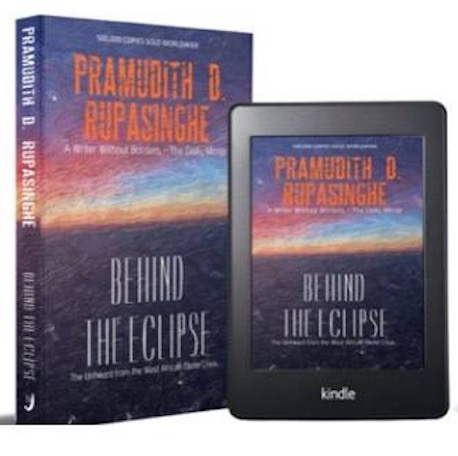 ‘Light and darkness follow each other in a mercurial cycle, just like the day is followed by night and the nights is followed by day’. Behind the Eclipse takes its reader on a compelling odyssey of self-discovery on the dynamic interactions among faith, relationships and fears in the face of uncertainty and death, through the life of a Kissi man, Tamba later known as George who survived Ebola as a widower, father of two survivor boys and a girl orphaned after the death of his first love ‘Kumba’. After losing half of his family, does he have anything to live for anymore? Will George be strong enough to cope with the horrendous realities as an Ebola survivor? How do spirituality and tribal wisdom enhance his resiliency? Are relationships the last resort when you are completely despondent?
‘Life is a battle that one has to fight selflessly, even when in the jaws of defeat’. Everyone has his own battle to fight to which George would be an inspiration.Footprints in Obscurity is available in 80 countries across the world, and been translated into 22 languages.

The story begins in 1945 in a remote village in Sumy region – North-east of Ukraine, today a village bordering to Russia remains almost abundant from urban luxuries yet tranquil, but It holds a great deal of vivid memories of a land that had transformed significantly during the lifetime of Ivan Nikolaevich.
He takes his Bayan and play his old-soviet melodies with his trembling fingers and tries to harmonise with the hum of bees which had come to the immense sunflower yard that extends to infinity behind his small cottage.
He talked to the skies and the earth.listened to the bees and watched the butterflies that flew across the sunflower yard. It looks like loneliness is his strength, silence is his song and changing scenes through his small window are his gallery of art where his eyes remain untried fixed at the horizon plunged in a pensiveness that only the old cracked Chinese ceramic cup of Chai might know what that is laden with.
‘I started loving my life at my sixties’ Ivan Nikolaevich laughed loud while gently stroking his long grey beard.Bayan is now available in Sinhalese, Polish, German, Russian and Burmese.

Footprints in Obscurity- A Living Story 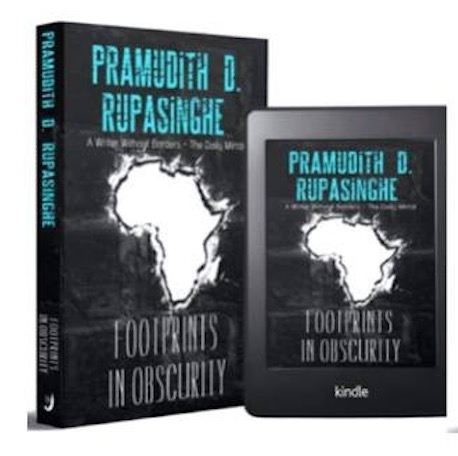 A boy who was longing to discover the imaginary world that conquered his mind when his father was narrating “free-time stories” reaches the final destination after three decades, breaking frontiers, overcoming diverse hurdles, and thus making the journey a unique and colourful experience. “Footprints in Obscurity” is an impressive effort by the author in taking the reader on a real-time journey across twenty-nine African countries. It’s a story of endurance, perseverance and transformation meshed with contemporary African realities, encapsulated in twenty chapters dedicated to carefully selected themes based on the author`s first-hand experiences during half a decade of travels. An unconventional revelation and a true story about Africa, the book also provides a profound psychological insight on how childhood dreams often shape one`s adult life. crumble. Currently, only English edition is available.

Compelling story skillfully weaved around the life of a child sex-worker in Bangladesh.

The story takes place at the northern tip of British Burma…. today`s Myanmar, in a Rohingya family that was forced to leave all what they had for generations…..
An enduring story of a refugee boy who survived a wreckage of a rattling boat in Andaman sea, and finally found himself in Chicago Illinois – a land a great promise was held, and becomes a leading entrepreneur in the county.
Being a minority is not a reason to be treated differently, believing in what the majority does not believe is not a reason to be persecuted. But being born in a minority family of most persecuted ethnicity on the earth, he realised that the world does not adhere to what the theories in the books say.
Today, he is cataracted about the tomorrow of his children on the land that sheltered him years ago.
‘I am one of them, we thrived in diversity and we built a nation which belongs to every one of us’. He sighs.
The book takes its reader on a journey that many people hesitate to go and compels to look at immigrants through a completely unconventional view point.